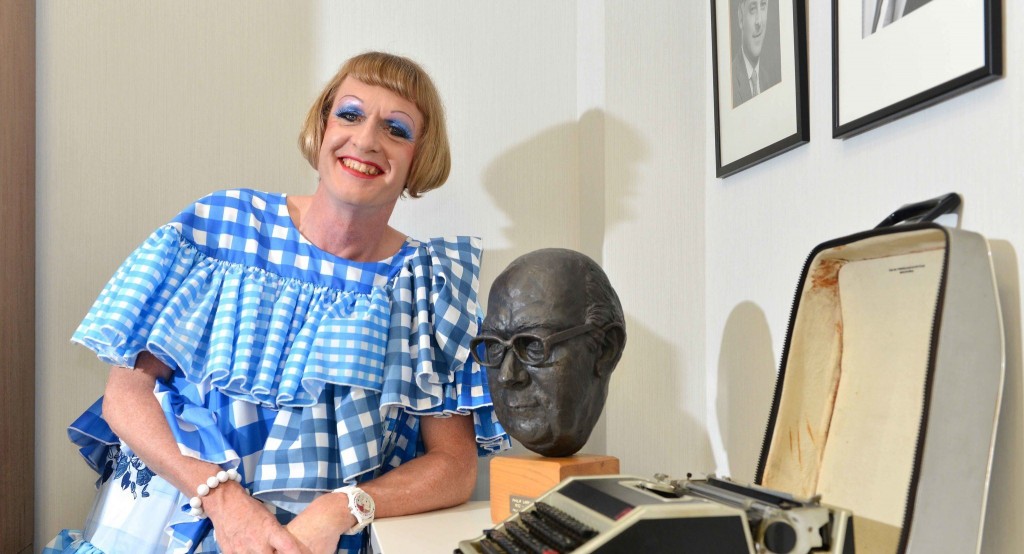 Blending profound meditation with stand up comedy and dressed in a pink creation designed by himself Grayson Perry held a packed Middleton Hall enthralled with his witty, highly personal account of his life and work. Middle class audiences, he noted, ‘do like a reference’, and there were allusions in plenty: Breugel, Paul Nash, Alain de Botton, medieval church architecture. But Philip Larkin recurred as letmotiv through it all. Perry related that, earlier in the day he had enjoyed the, for him, novel experience of ‘being a fan’, as he had, been shown round the ordinary sites of Larkin’s life by members of the Society. He has been ‘stuck on Larkin big time’ for many years. Like Larkin he finds ‘everyday things’ lovely. His works are concerned to ‘make the everyday resonant’.

He recollected quoting from ‘This Be the Verse’ in his Turner Prize acceptance speech in 2003, when he had teased his audience with a dangerous pause: ‘They…; concluding, to some relief, ‘may not mean to, but they do.’ An account of his dysfunctional early family life (he and his siblings were ‘like shrapnel around my mother’) led to an extended analysis of his ‘self portrait as a city’, ‘A Map of Days’. The title alludes to Larkin’s poem ‘Days’, which, he remarked is ‘partly about the idea that we live in time’. Larkin would have relished Perry’s deeply lyric conception of art. The centre of the picture is occupied by an empty space through which a tiny Grayson kicks a can down a road. There is no ‘core’. We are constantly mutable, without a fixed identity, mere sequences of experience. We may talk about geography and family, we may imagine a structure to life, but ‘we’re stuck in time. We have to move on into the next second, the next minute. We can’t relax – Sorry!’ (laughter and applause).

The philosopher Julian Baggini, Perry recalled, remarks that the word I is a verb masquerading as a noun; and, in an inspired self-analysis, he applied this truth to the very artistic process by which he produces his works: ‘I start in the top left-hand corner and carry on down’. Nevertheless, this having been admitted, he is pretty good at ‘post-rationalisation’, explaining, after the event, the ‘meaning’ at which every artistic work aims. As so often when reading Larkin, the audience was entertained by an apparent no-nonsense debunking of all pretension, which on reflection revealed itself to be a profound meditation on art, on life. The lecture roamed far and wide, as did the long-legged, shiny pink-clad lecturer, striding restlessly to and fro, moving from powerpoint image of one work to another, and ending with an extended account of his ‘A house for Essex’, or ‘Julie’s House’, or ‘The Taj Mahal on the Stour’, in Wrabness Essex, his most ambitious project to date.

This was, according to all, the most exhilarating annual guest lecture we have ever heard. Even afterwards Grayson Perry was adding to the experience (as @Alan_Measles), tweeting next day, against a photograph of himself on the train from Hull:  ‘Had he been on such a fast modern train “Whitsun Weddings” would have been a haiku.’ 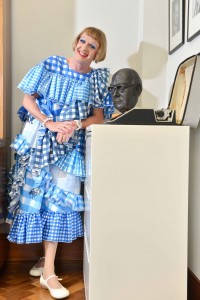