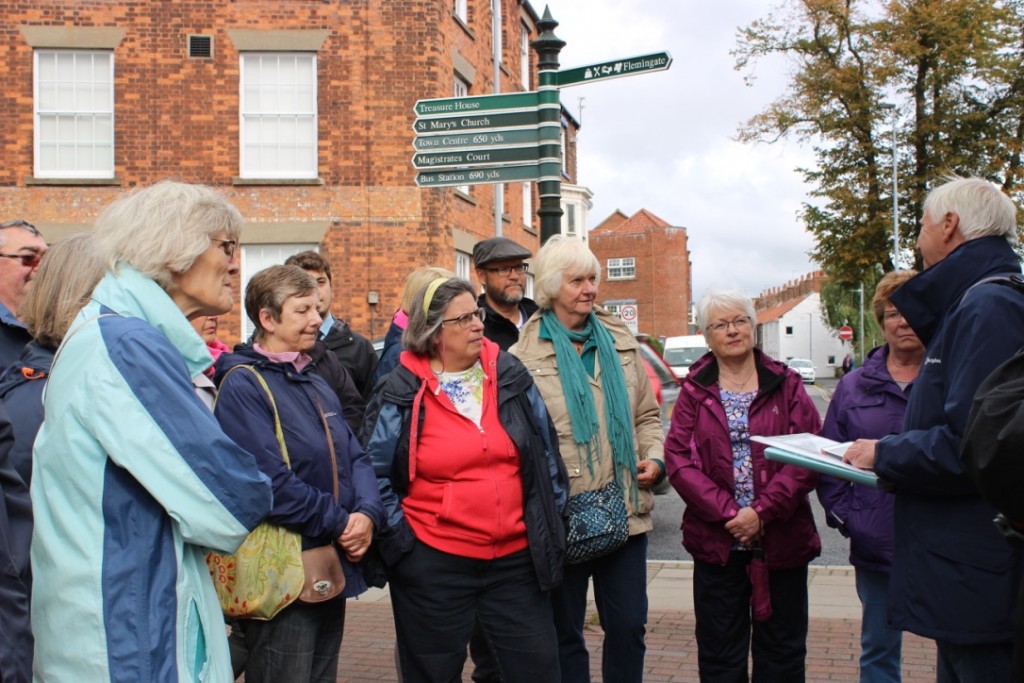 Larkin About in Beverley

As part of the highly popular East Yorkshire’s  Walking and Outdoors Festival, Philip Pullen, the Society’s media and publicity officer, led the first ever Larkin walk around Beverley.

Starting outside The Beverley Arms, a favourite haunt of Larkin throughout the 30 years he lived in Hull, the walk circled and criss-crossed the town centre, taking in the lanes leading to the Westwood Pastures which Larkin walked with Maeve Brennan; the Art Gallery, where he admired the Elwell paintings and bought a watercolour from an exhibition by ‘Friends of The Minster’ (“A very drab, Hully picture,” was how he described it to Monica Jones), and ending up in St Mary’s Church, a building which Larkin greatly admired and in which he took delight in discovering the ‘pilgrim rabbit’ said to be the inspiration for the white rabbit in ‘Alice in Wonderland.’ The route provided many opportunities to highlight features of Larkinalia and, in particular, the part Beverley had to play in his love life.

Larkin first visited Beverley in April 1955, a month or so after taking up his post as Librarian at Hull University, cycling the six miles or so in an impressive 35 minutes (he told his mother afterwards that it had left him with muscles “like perished rubber.”).  Typically, his initial view of the town was somewhat mixed and contradictory. “Beverley doesn’t make a great impression on me,” he wrote to Monica Jones, immediately after retuning from the visit. “ I went into the Minster, and also into the Parish Church (almost as big), but did not really grasp much.” Nevertheless, he was struck by ‘a beautiful street of mansions & chestnut trees called North Bar Without,’ and also by St Mary’s “lovely painted roof with all the early kings of England… over the choir.”

However, Larkin concluded that he didn’t want to live in the town as he felt it was “too far and too large.” He also condemned it for having no bookshop (an observation that might have been challenged by the then owners of Green’s Stationers on Saturday Market!). 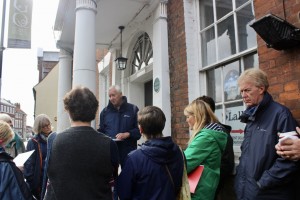 Outside the Beverley Arms Hotel.

“I stayed for dinner (melon, steak, & raspberry & apple tart, with a glass of burgundy) and cycled back.” 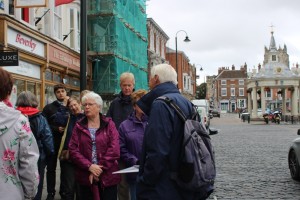 “Beverley is very much a country town, quite good for food but no good for anything else except gardening tools and labourers’ boots. There is a big market where they sell flowers & vegetables & cheap clothes… I always buy the same things from the same shops.” 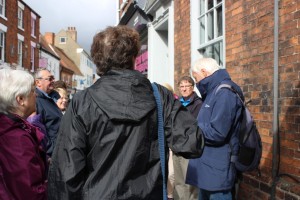 Despite his initial judgement, Larkin was to make frequent visits to the town throughout the rest of his life, for shopping expeditions, afternoon tea and dinner at the Beverley Arms (frequently with Maeve Brennan, who had been born in Beverley but also, on occasions with Monica Jones and Betty Mackereth). He soon developed a strong affinity for the town and many of the surrounding villages in the East Riding.

In 1956 Larkin attended a jazz concert given by the Chris Barber Band at the Regal Ballroom in Beverley (now Sleepers Restaurant) but had to leave after half of their set to catch the train back to Hull. “It cost me 9d on the train and 4/6 to get in,” he told Monica, “but it was worth it to see their faces again.” 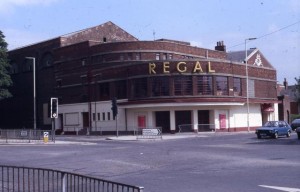 The walk also took in the homes of some famous Beverley residents with whom Larkin had a connection, including Sir Brynmor Jones, the University Vice Chancellor for more than half of Larkin’s tenure as Librarian, and the composer Anthony Hedges, who collaborated with Larkin to write “Bridge For The Living” in honour of the opening of the Humber Bridge. Walkers were also shown the birthplace of Maeve Brennan in Wednesday Market and discovered how Larkin took driving lessons with Betty Mackereth in the narrow streets of Beverley, greatly endangering the lives of fleeing pedestrians along Hengate.

Walkers also learned that Beverley surprisingly holds a small place in Larkin’s literary publications. In 1975, he consented to give a rare interview to the then editor of The Beverlonian, the magazine of Beverley Grammar school. ‘It so happens that in recent months I have declined to be interviewed by The Observer, The Sunday Times and the New York Times,” Larkin told the editor, Steuart Hamilton, in his letter of acceptance, “however, your magazine sounds a less frightening ordeal.” Larkin made one condition – that the interview would last for no more than half –an-hour. The resulting piece, which can be found in the East Riding Archive in Beverley’s Treasure House, provides a fascinating insight into the way Larkin approached poetry writing and his views on having his poetry set for G.C.E. examinations:

“Bernard Shaw said he never wanted to be taught in schools, because that would ensure that the younger generation hated him. But I think he is probably right. It is rather daunting to think that you are being thought of as, well, automatically dead: anybody taught in schools is dead.”

For his sheer pluck and endeavour, the enterprising young editor received a signed copy of ‘High Windows.’