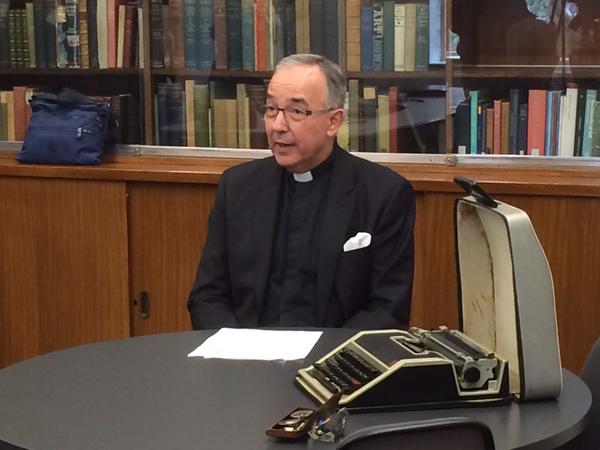 Here is the full text of the Dean of Westminster’s announcement, made on 17th June 2015.

Statement by the Dean of Westminster

With the kings and queens in Westminster Abbey are buried or memorialised 3,300 men and women, many of whom have contributed with distinction to the health and well-being not only of the people of England and the United Kingdom and Commonwealth but of the whole English-speaking world. Within the Abbey’s ancient walls, alive with prayer and celebration, are writers and poets whose work has entertained and ennobled their readers, lying among the benefactors, inventors and scientists, actors and architects, clergy, artists and musicians, politicians, judges and explorers, soldiers, sailors and airmen.

Decisions whom to memorialise are not altogether easy. And they must be made by the Dean, who is of course fallible. There are no rules or regulations applying to the decision. Each Dean makes his own decision. Of course, generally Deans have consulted those with experience and recognised expertise. In the end, no doubt, Deans go with their gut instinct or are swayed by impressive voices and circumstances.

My predecessor Wesley Carr was approached many years ago about a memorial for Philip Larkin in Poets’ Corner and was impressed by the case as his predecessor Michael Mayne would have been. But Dr Carr believed it right to wait at least twenty years until it was possible to see whether a reputation was likely to be secure. He did not refuse memorialisation but delayed it.

On 6 December 2011 – Ted Hughes was memorialised in the Abbey. The intention to memorialise him in Poets’ Corner had been announced in March 2010. Alan Bennett wrote in his diary on 23 March 2010, ‘That Ted Hughes should have got into Poets’ Corner ahead of Larkin wouldn’t have surprised Larkin, though he must surely have a better claim. Though Hughes fits the popular notion of what a poet should be, many more of Larkin’s writings have passed into the national memory.’

Philip Larkin had a memorial service in the Abbey on 1st February 1986 – and it was not entirely without controversy with some traditionalist clergy. I do not know what were their reasons. Perhaps they were only concerned about one pithy expression in the opening line of one of his poems. If so, their concern can be summarily dismissed. His letters had not yet been published. They give us pause. He was expressing himself in a way that would be generally unacceptable today but that was then and private.

It may be that some might have complained back in 1986 that Larkin was no practising Christian, no adherent of the Church. That does not appear to me to erect a barrier against memorialisation in the Abbey. We who are Christian believers see God’s work in all that is good and beautiful, see the love and joy of God working through those who share in God’s wonderful work of creation, even when they are unaware of their share in God’s work. Philip Larkin, it has been said, was an agnostic but an Anglican agnostic.

Alan Bennett also wrote in his diary on that day in 2010, ‘Two deans back, and not long after Larkin’s death, I remember Michael Mayne saying that Larkin had earned his place on the strength of ‘Church Going’ alone.’ I agree but there is much more besides.

I am pleased to announce here in his library my decision to place a ledger stone in Poets’ Corner near the grave of Geoffrey Chaucer to commemorate the life and work of Philip Larkin. I am grateful for the collaboration of the Philip Larkin Society.

It is my intention that the memorial should be installed and dedicated in the autumn of 2016. Some will see it as a fitting curtain raiser for Hull’s year as City of Culture 2017.